The electric vehicles sales have grown significantly over the last decade and we are at the cusp of transformation now with supportive government policies, improved consumer sentiment and technology advancements. However, a few concerns related to range anxiety and charging time still remain. The safety of an electric vehicle and incremental care needed to maintain the battery performance are additional concerns that need to be addressed in the thermal management system.


Batteries are considered as the backbone of electric vehicles and the battery temperature is a critical factor for ensuring the safety of the vehicle. The batteries used in electric vehicles are of rechargeable type and it is crucial to maintain the temperature within the prescribed range during different battery operations.


The intense rise in temperature or overheating in any one of the cells can lead to an explosion or fire incident in electric vehicles. This demands for some mechanism through which the status of the cells can be continuously monitored and the temperature and other parameter can be controlled to provide best working environment for the batteries. This can significantly improve the overall vehicle efficiency and performance.


The lithium-ion batteries are the preferred choice for electric vehicles due to their features such as high energy density, long cycle life, high specific power, low discharge rate, etc. However, performance and life span of these batteries depend on maintenance of certain temperature range. If the temperature go beyond the prescribed limits, it results into early aging and reduces the overall capacity of the battery. Therefore, thermal management system plays a vital role in maintaining the temperature of lithium-ion batteries in electric vehicles.

Working of lithium-ion batteries and need for temperature control


Inside the two electrodes, there is a liquid called electrolyte. It carries positively charged lithium ions from the anode to the cathode and vice versa depending on the battery ongoing process, i.e. charging or discharging. The two terminals are separated from each other through a separator which blocks the flow of negative and positive electrons inside the battery but allows ions to pass through it.


When all the ions have moved back and they stop flowing through the separator, the electrons also stop flowing and this means that the battery is fully discharged and needs to be charged again. Both the movements are interconnected and if either one starts or stops flowing, so does the other. 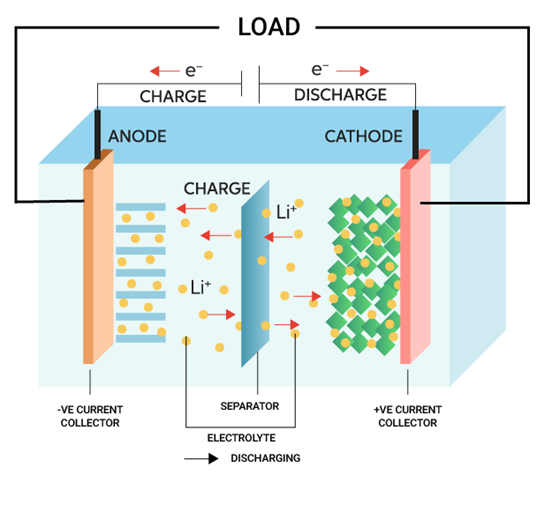 The liquid which act as electrolyte in these batteries is flammable in nature. It can easily catch fire or explode if the heat inside the battery increases. The overcharging and over-discharging in lithium ion batteries because of overheating result into an electrochemical reaction called thermal runaway. This condition can further cause explosion or the battery can catch fire. Therefore, it becomes a major concern for the safety of electric vehicles where these batteries are used. One of the most efficient ways to control the heat in these batteries is the thermal management system.


The main function of Battery Thermal Management System (BTMS) is to maintain the battery temperature within safe limits to avoid the risk of thermal runaway. It uses different mechanism such as cooling, heating, insulating, etc. to ensure right operating conditions of the battery pack. The cooling function reduces the excessive heat in the battery pack, thus maintaining the temperature level in prescribed range and thus restricting its a dverse effect on the adjacent cells.


The heating function is mainly required in cold places and with this mechanism the battery temperature is raised to required level for proper functioning. The third function of insulation helps in balancing the temperature of the battery pack in extreme cold and hot weather, when the vehicle is parked in open. The last one is ventilation mechanism which creates a way for hazardous gases to move out of the battery pack, and suppress thermal runaway propagation in electric vehicles. 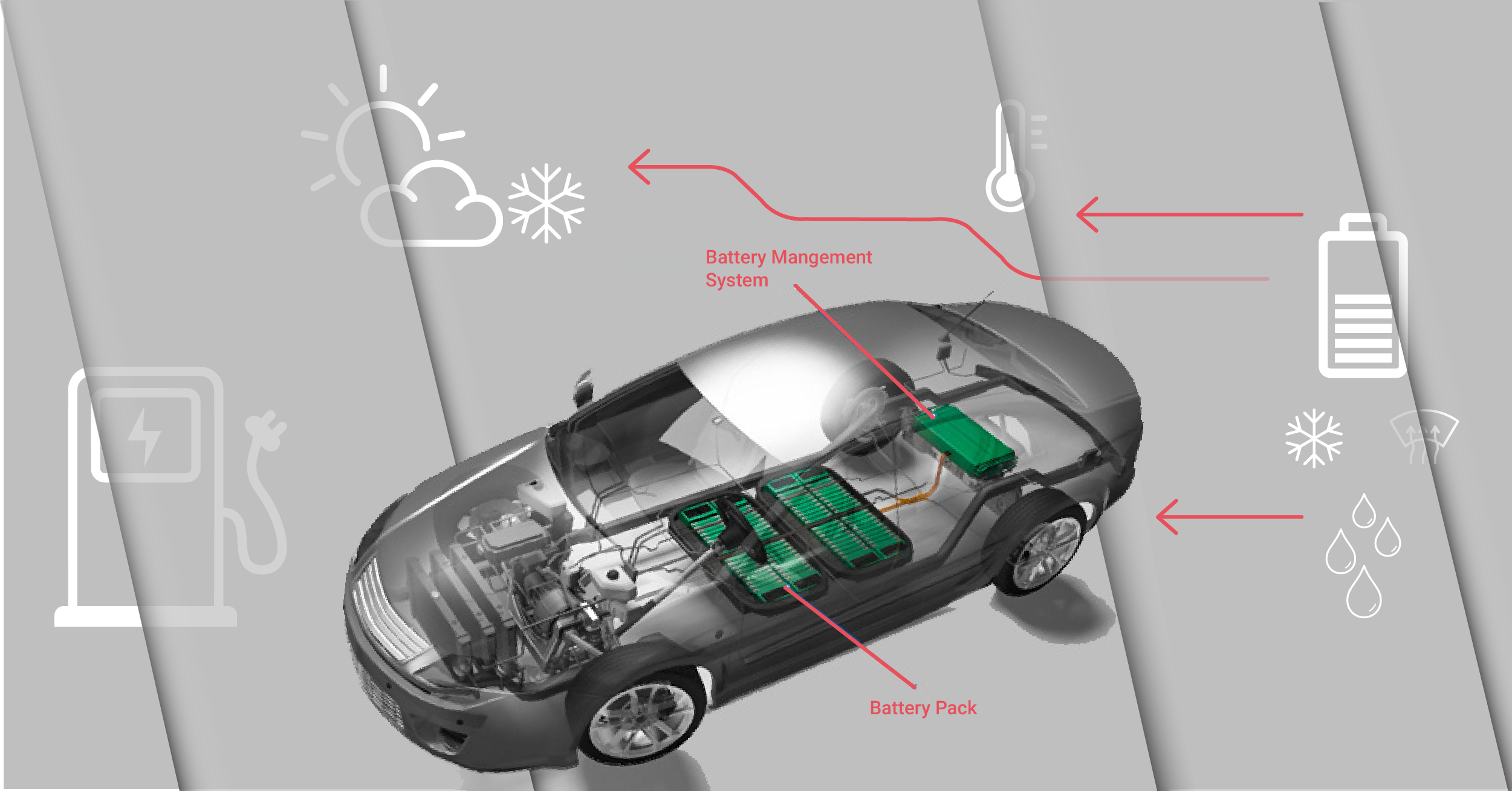 
The demand for electric vehicles is increasing rapidly. Therefore, there is a pressure on battery manufacturers to design batteries with proper thermal management system to provide high level of safety, high power output and longer battery life. The main causes of thermal runaway are electrical, mechanical and thermal abuse. The impact of these abuses can be reduced significantly if a proper cooling system is incorporated along with the considerations of choosing a good battery design, efficient battery materials, proper cooling system etc.


It is the simplest and most cost effective way of cooling the batteries. The air cooling allows the heat transfer from the battery pack as the air runs over its surface. These systems offer heating, cooling and ventilation functions as per the requirement of the battery pack. It is one of the earliest adopted methods and it makes use of natural as well as forced convection depending on the intake of air in the air cooling method. Both of these convection methods decrease the average temperature of the battery cell. This is mostly used for stationary battery energy storage system applications.


It is considered as the safest method for cooling the battery packs in electric vehicles. The liquid coolants used in these methods have more heat conductivity than air coolants. In addition, they have high heat capacity which enables it to store more energy. However, liquid coolants have certain safety issues such as leakages and proper disposal of these liquids is still an important environment concern.


There are two type of liquid cooling systems:


The refrigerant direct cooling system offers higher cooling rates as compared to liquid glycol cooling method. The battery can be cooled or heated by circulating coolant through it. Different coolant materials are used for heating and cooling function. This method is one of most popular methods to cool the battery.


This allows the absorption of heat when the phase changing (solid to liquid) takes place. It doesn’t make much reduction in the temperature because of the fact that phase change material is not capable of transferring the heat from the battery pack. Because of the little change in temperature by this method, it is generally preferred to use PCM method in combination with air cooling or liquid cooling system for providing better thermal stability for battery packs.


This method makes use of heat transfer devices with extremely high thermal conductivity. Therefore, it not only ensures better heat dissipation but also provides better temperature uniformity. These are most popular with prismatic and pouch batteries because of their shape and large contact surfaces. The working of heat pipe method depends on the temperature gradient between the evaporation and condensation of the working fluid.


Besides the methods described above, the methods such as hybrid battery thermal management system, thermoelectric coolers, etc. methods are also available in the market. The necessity of ensuring the safety in electric vehicles have motivated a lot of technological developments in thermal management system is to provide efficient cooling arrangement to balance the temperature under all situations.


The selection of a particular BTMS for high performance electric vehicle depends on a number of parameters. The main aim of thermal management is to enhance efficiency and reliability of batteries.


Some of the key characteristics of robust BTMS is as follows: 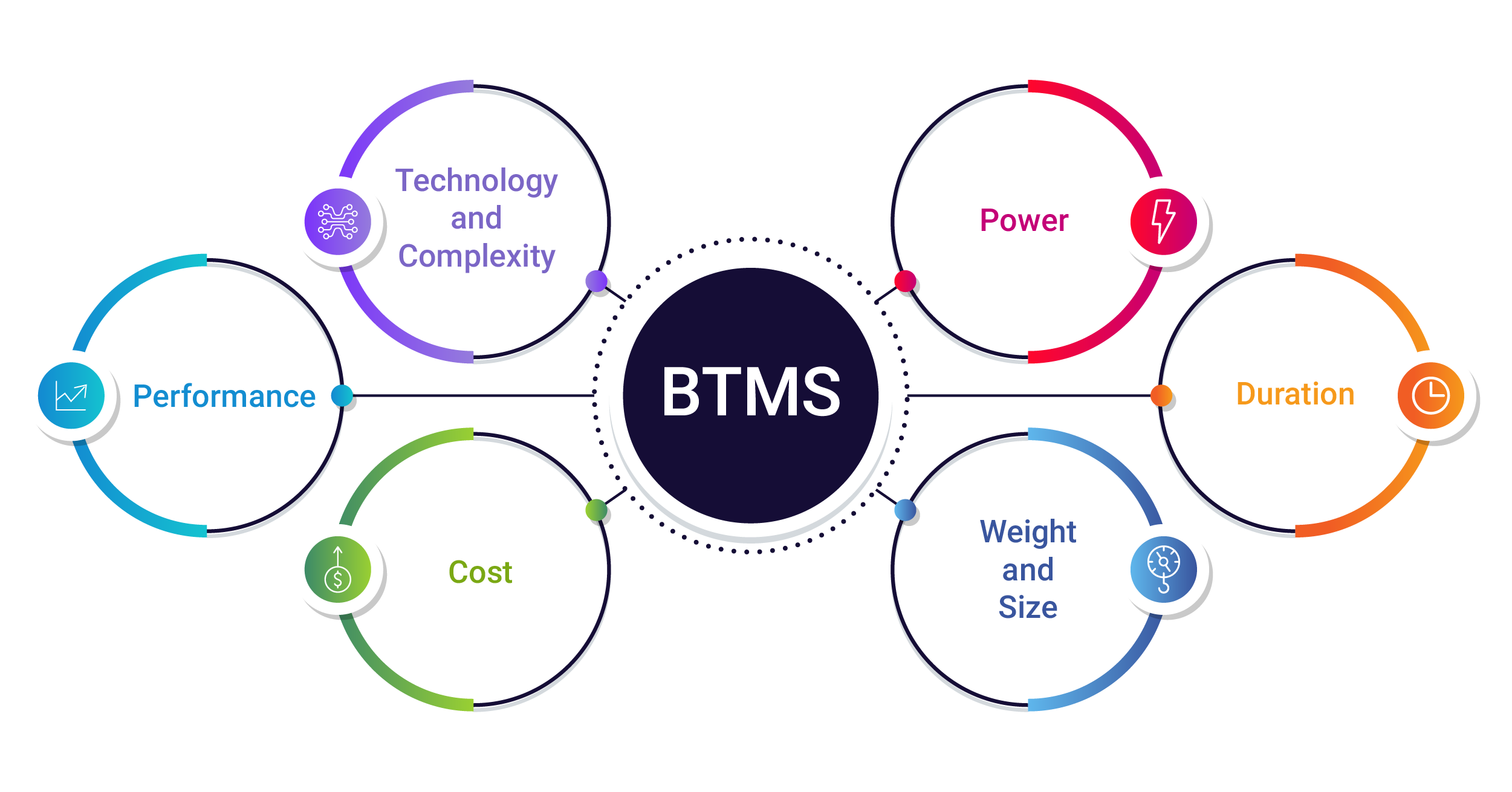 
The selection of the right technology such as liquid or air cooling is significant for the type and requirement of electric vehicle segment.


The small size BTMS should be able to provide sufficient cooling in the batteries.


It defines the period for which the battery temperature will remain stable after cooling procedure.


BTMS should be light weight and easy to handle.


It ensures the level of cooling provided by BTMS. It should handle the overheating conditions and take minimum time to control overeating situations.


It should be easy to install and implement to make it commercially viable.


The role of the battery thermal management system is to optimize the operation of battery in terms of performance and life. To satisfy the increasing demand of higher capacity and charge/ discharge rates in the expanding EV industry, the battery safety should be considered on priority. BTMS must be proficient enough to deliver faster charge rates and improved driving performance.