Lithium-ion batteries are used in powering almost all the electronic gadgets around us, from our earbuds to laptops and mobile phones. Their usage is not limited to consumer electronics alone and these batteries are popular in electric vehicle industry as well. Since these are considered to be the most suitable energy storage devices for powering the electric vehicles, the demand for lithium ion batteries has been increasing tremendously in the last few years.


Origination and Fundamentals of Lithium-Ion Batteries

A lithium-ion battery is a family of rechargeable battery types in which lithium ions move from the negative electrode to the positive electrode during discharge and back when charging.

Before Lithium-ion batteries became popular in 1990s, Lead Acid batteries were developed and used in 1800s. Then, Nickel-Cadmium and Nickel-Metal Hydride batteries came and got accepted due to their better performance.

However, there was still a need for a battery that could be easily recharged in a timely manner. In 1991, after a prolonged research around the world by different scientists, Li-ion batteries were finally invented. These batteries became popular within no time and now they are widely accepted in the market. 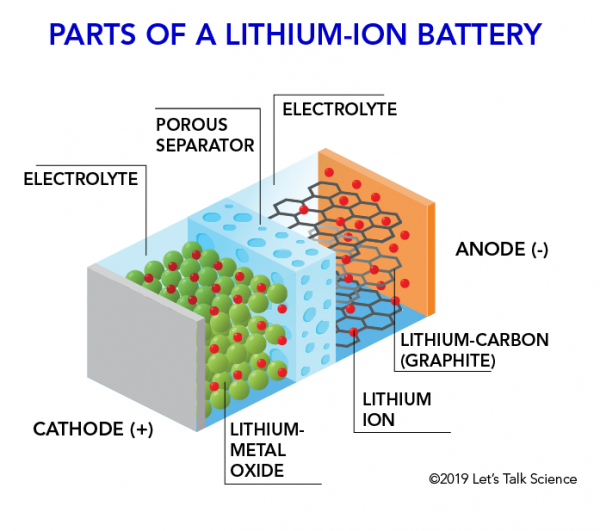 Anode and cathode store the lithium and the electrolyte carries positively charged lithium ions from the anode to the cathode and vice versa through the separator. The movement of the lithium ions creates free electrons in the anode which creates a charge at the positive terminal. The electrical current then flows from the current collector through a device being powered to the negative terminal. The separator blocks the flow of electrons inside the battery.

While the battery is discharging and providing an electric current, the anode releases lithium ions to the cathode, generating a flow of electrons from one side to the other. When plugging in the device, the opposite happens: Lithium ions are released by the cathode and received by the anode.

Lithium-ion batteries initially got popular in consumer electronics industry because of their rechargeable quality. Today, they have become a standard for any device that needs a portable rechargeable battery. With their high energy density feature, they are revolutionizing the EV ecosystem as well.

Lithium ion-batteries can work under different conditions that include very low as well as very high temperature, high as well as low drain, and for shock and vibration tolerant environments.

First, Lithium-ion batteries are capable of packing huge amounts of power. They have one of the highest energy densities among different battery types, in the range of 100 – 200 Watt-hour / kg. For this reason, they function as high-power sources for renewable applications, such as electric vehicles

Self-discharge decreases the shelf life of batteries. For any device that requires a constant source of energy, it is critical to have batteries that have low self-discharge rates, which is a measure of how quickly a cell will lose its energy while sitting on the shelf due to unwanted chemical actions within the cell.

Lithium is non-toxic and completely recyclable. Once these batteries are used, it is easily returnable to the concerned industries where metal salts of lithium, cobalt, nickel and manganese are extracted. These extracted salts are reused in manufacturing various energy storage systems.

Lithium-ion batteries provide clean source of energy and easy to recycle. In comparison, lead acid and Nickel-Cadmium batteries are highly toxic and difficult to recycle.

Lithium-ion takes a maximum of one hour or less to charge. This is much faster as compared to lead acid batteries which takes more than 10 hours to charge. Even Ni-MH batteries take two to four hours for charging. With Lithium-ion battery, machines have lesser idle time. This is particularly important in the case of rental cabs and taxis where less downtime leads to more income for drivers.

The slow self-discharge rate in lithium-ion batteries allows a longer life span. For this reason, the average lifespan of a lithium-ion battery is more than eight years. This life span can be further extended with good maintenance and servicing. Lithium-on batteries give good performance for high-power applications and they have the capacity to deliver more current compared to other battery alternatives.

Besides the benefits we have covered in the above section, lithium ion batteries have a few drawbacks. In order to achieve better performance from Lithium-ion batteries, these concerns need to be addressed.

The disadvantages associated with these batteries are as follows:

The ageing of lithium ion batteries occurs due to innate chemical reactions between the negative electrode and electrolyte. The phenomenon called calendar aging allows these chemical reactions to happen whether the vehicles are in use or not. In case of EVs where the operation periods are substantially shorter than the idle intervals, the calendar aging is an important factor which leads to the degradation of the battery cell. If these batteries are stored in a cool place then the ageing can be slowed down to a greater extent.

The cost of lithium ion batteries is already higher than Ni-Cd batteries and with the widespread adoption of electric vehicles in automotive market, the demand pressure is further increasing. Therefore the price of these batteries are increasing year by year.

Lithium easily reacts with other elements resulting into cracks. These cracks weaken the strength of the battery. The batteries need to have good sealing to avoid any harm from these cracks.

Despite the disadvantages, Lithium-ion batteries have been widely adopted in various applications for last many years. Experts believe that there is a lot of scope where improvements and research can be expected to get better performance from lithium ion batteries. Since the technology always improves with the time, new lithium ion technologies are being developed in the coming time for better solutions.

With continuous research in this space, the price of lithium-ion technology is coming down. Also, more efficient batteries are getting developed that are allowing vehicles to have higher range. To improve battery features such as longevity and density, alternative materials are getting identified for cathodes. Cobalt or nickel based material are most popular and useful alternatives for cathode in electrical vehicles today.

As electric vehicles keep becoming the way of life for millions of consumers globally, the innovation in lithium-ion batteries will continue. This will keep pushing the boundaries, bringing newer, smaller and cheaper batteries and yet longer life and more power.